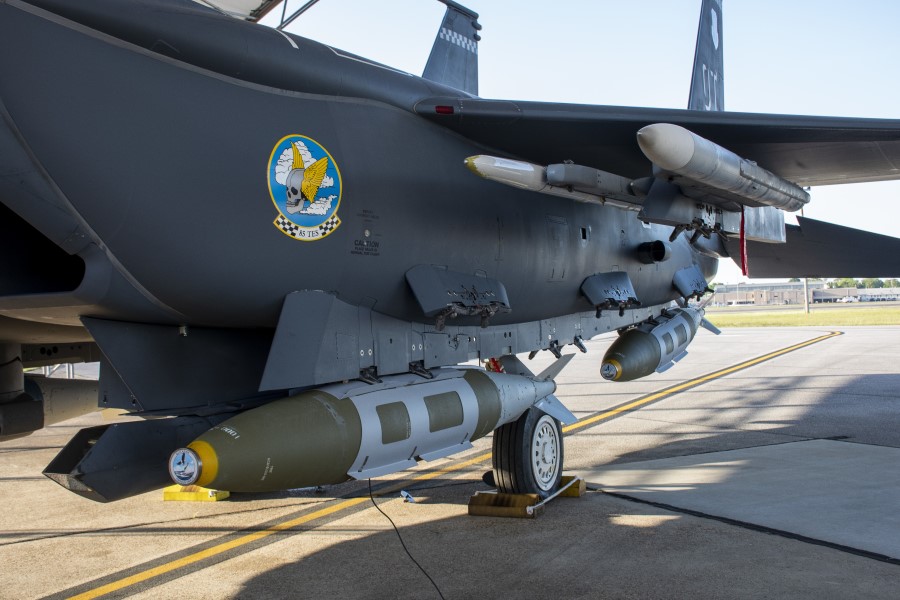 An F-15E Strike Eagle released one modified GBU-31 Joint Direct Attack Munition, or JDAM, as part of this test, the second experiment in the QUICKSINK Joint Capability Technology Demonstration, or JCTD, funded by the Office of the Under Secretary of Defense for Research and Engineering. The test succeeded through a collaborative effort with AFRL, the 780th Test Squadron of the 96th Test Wing, and the 85th Test and Evaluation Squadron of the 53rd Wing.

“QUICKSINK is an answer to an urgent need to neutralize maritime threats to freedom around the world,” said Col. Tony Meeks, director of AFRL’s Munitions Directorate. “The men and women of this directorate consistently find ways to solve our nation’s greatest challenges.”

AFRL scientists and engineers are developing a weapon open systems architecture, or WOSA, seeker to enable precise placement of the weapon. The implementation of WOSA also lowers costs by providing modularity via the ability to plug-and-play different manufacturers’ seeker components, which can lead to reduced weapon system costs and enhanced performance.

The QUICKSINK program, a partnership with the U.S. Navy, aims to provide options to neutralize surface maritime threats while demonstrating the inherent flexibility of the joint force. This JCTD uses a JDAM to rapidly deliver an immediate effect on stationary or moving maritime targets at minimal costs.

“Heavy-weight torpedoes are effective [at sinking large ships] but are expensive and employed by a small portion of naval assets,” said Maj. Andrew Swanson, 85th TES division chief of Advanced Programs. “With QUICKSINK, we have demonstrated a low-cost and more agile solution that has the potential to be employed by the majority of Air Force combat aircraft, providing combatant commanders and warfighters with more options.”

This latest experiment allowed researchers to assess the scientific and technology challenges associated with the QUICKSINK concept for operational use.

“A Navy submarine has the ability to launch and destroy a ship with a single torpedo at any time, but the QUICKSINK JCTD aims to develop a low-cost method of achieving torpedo-like kills from the air at a much higher rate and over a much larger area,” said Herzog.

As it was released over the Gulf of Mexico, where Eglin operates the 120,000 square mile Eglin Gulf Test and Training Range, stakeholders watched the QUICKSINK demonstration online thanks to multiple camera feeds from aerial platforms.

“The QUICKSINK mission was successful thanks to the hours of planning and preparation provided by the entire test team,” said Capt. J. Tucker Tipton, Air-to-Surface Test Flight commander, 780th TS. “This was another example of how the 780th Test Squadron supports weapons developmental test customers and helps deliver unique capabilities to the warfighter.”

OUSD(R&E) awarded this JCTD to AFRL’s Munitions Directorate in fiscal year 2021 as part of its ongoing Maritime Weapon Program.