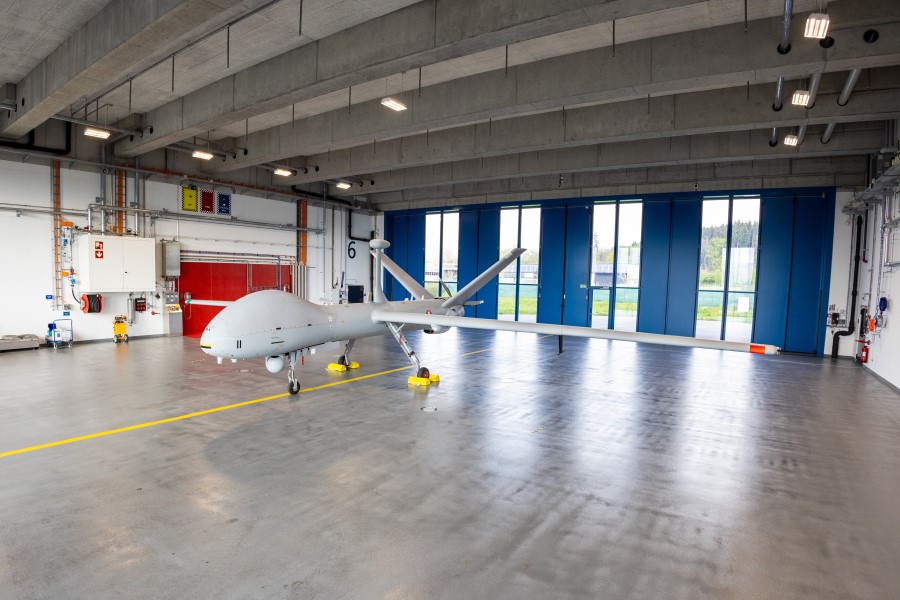 The first two drones of the reconnaissance drone system (ADS 15) have arrived in Switzerland. In the coming months, they will undergo flight testing before being handed over to the Air Force in 2022.

In two deliveries on 21 and 26 April 2022, the first two drones and two ground control stations of the reconnaissance drone system (ADS 15) arrived in Emmen. The deliveries were transported by sea and land from Israel to Switzerland. Another component of the deliveries was various material for maintenance and the subassemblies necessary for the operation of the ADS 15.

First drone assembled
The specialists of the manufacturer Elbit have already assembled the first drone (enrollment D-11) and will subject it to a functional check before it is ready for further tests of armasuisse flight testing. The second drone (enrollment (D-14) will follow in the next few days.
In the coming weeks, the delivered system components will be integrated into the Swiss infrastructure and then all components will be subjected to a functional test in several steps.

Maiden flight in Switzerland in mid-2022
With the completion of the functional tests of the two drones, the prerequisites will be created for armasuisse specialists to start ground and flight testing. These tests include a review of the system during taxiing tests on the runway of Emmen Airfield, followed by the maiden flight in mid-2022, as well as a series of other test flights. After completion of the flight testing and certification activities of the military aviation authority MAA, the two drones will be handed over to the Air Force in the course of the second semester. The remaining four drones will follow by the end of 2023.

Reconnaissance Drone System 15 (ADS 15)
The ADS 15 is an unmanned and unarmed reconnaissance system. It will replace the reconnaissance drone system 95 used in the army until the end of 2019, which corresponded to the state of technology of the 1980s. The intended useful life of ADS 15 is 20 years. The drone is used for situation and target reconnaissance, but can be equipped with other sensors if necessary, for example for imaging radar to generate an image of the ground situation or for electronic reconnaissance. With the drone system, it can be used day and night. The following services can be provided with the ADS 15:

Monitoring of large rooms
Searching, reconnaissance and pursuit of goals
Contributions to the situational picture and the protection of critical infrastructures as well as one’s own forces
As with the predecessor system ADS 95, the users are military and civilian bodies such as cantonal command staffs, police and rescue bodies or the border guard corps.

In repelling a military attack, ADS 15 contributes to the management and control of actions on the ground, especially for fire support. In addition to reconnaissance drones, today only helicopters equipped with infrared sensors (Forward Looking Infrared, FLIR) are suitable for aerial reconnaissance. However, they are not economically competitive with drones (costs per operating hour, length of stay above the area of operation).

Drones are enduring, reliable, low-risk and cost-effective means of maintaining a permanent presence over an area of operation.
The procurement includes six drones including ground components, simulator and logistics.