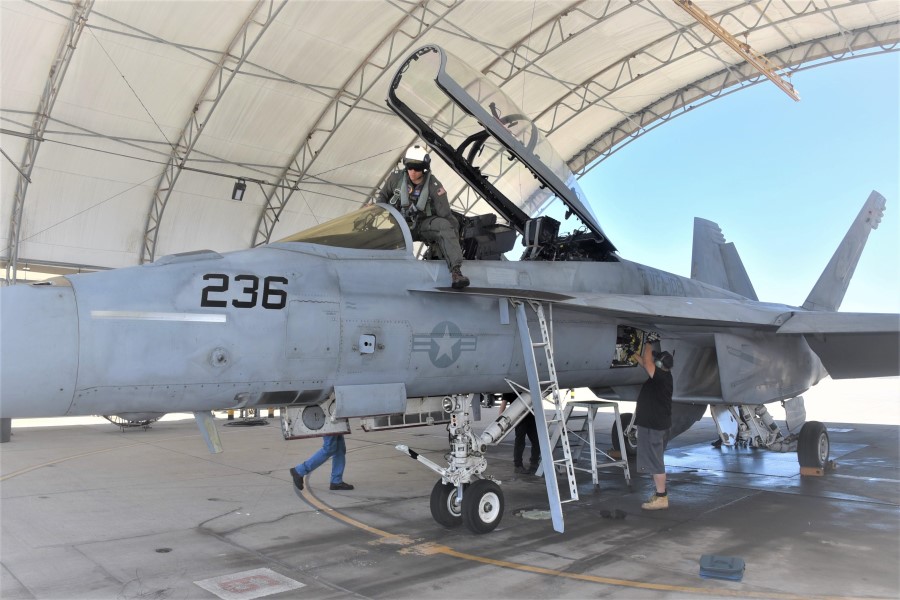 Once again the command is at the maintenance forefront of the F/A-18 airframe, this time taking the lead as the only FRC currently assigned to perform the Service Life Modification (SLM) to the Super Hornet E and F variants.

Like the legacy CBR procedure created by FRCSW in 1991, the Super Hornet SLM will be conducted when an aircraft reaches 6,000 flight-hours, extending the service life of the airplane to 7,500 and eventually 10,000 flight-hours.

Super Hornet variants have been active in naval service since 1999.

FRCSW F/A-18 Legacy & E/F Program Manager Ehren Terbeek said that the Super Hornet SLM will require less time to complete than the legacy CBR/high-flight-hour modifications because the Super Hornet procedure will not involve the replacing of major structural components.

So, the SLM should be complete in several hundred hours vice several thousand as needed for the legacy Hornets.

“The SLM will involve over 20 direct artisans as well as a team of MRO and Fleet Support Team (FST) engineers and other support groups. They have been tasked with a 17-month turn-around time (TAT) but will work in earnest to complete the project earlier than that,” Terbeek said.

“The SLM will be comprised of a series of inspections that can drive repairs, as well as incorporate technical directives and standard dispositions that have been created for the event.”

“The most difficult aspect in performing the modification is the unknown of opening up a 6,000 flight-hour aircraft, the known requirements are understood by the team but it is the unpredictability of items outside of the scope of work that are always the most worrisome,” Terbeek said.

The F/A-18 & EA-18G Program Office (PMA-265) and Boeing established the initial procedures for the SLM, and two years ago, Boeing delivered the first Super Hornet to complete the modification to the Navy.

“The SLM does offer the opportunity to credit an E/F aircraft with a new fixed induction date (FID) for PMI if certain requirements are met during the modification,” Terbeek noted.

Terbeek added that eventually Block III upgrades, or avionic type modifications, will be added to the existing SLM workload. The upgrades include an advanced cockpit system with a touch screen display, enhanced networking and a reduced radar signature.

The SLM budgeted cost per aircraft is currently $5.5 million.

FRCSW will induct its second SLM Super Hornet during the second quarter of Fiscal Year 2023.