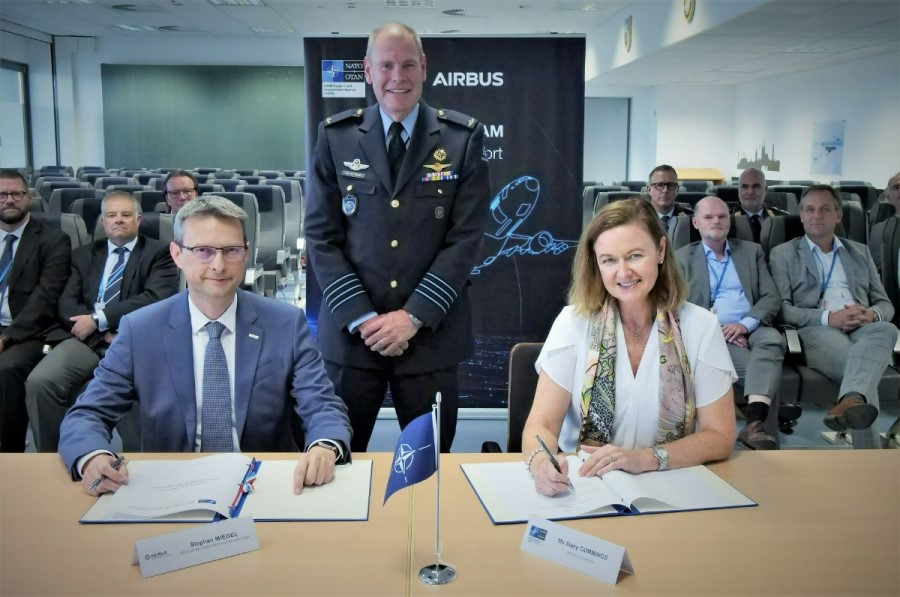 The NATO Support and Procurement Agency (NSPA) has awarded a multi-year contract to Airbus Defence and Space to provide Follow-on Support Services to the Multinational MRTT Fleet (MMF) until the end of 2032. This contract is a key step for the sustainment of the multinational fleet, which will soon reach Initial Operational Capability to provide six Allied Nations with strategic transport, air-to-air refuelling, and medical evacuation capabilities.

Airbus will work closely with NSPA and the Multinational MRTT Unit, managing and leading all aspects of the fleet maintenance and follow-on support, including aerial refuelling boom and PODs support, and air and ground crew training. This will include overseeing the performance of all sub-contractors, including Rolls Royce and AirTanker, responsible for the engine support and the maintenance execution, respectively.

On 26 July 2022, a signing ceremony took place at the MMF Forward Operating Base in Cologne, bringing together key stakeholders to mark the event. Representatives from NSPA, the Organisation for Joint Armament Co-operation (OCCAR), the Multinational MRTT Unit, Airbus Defence and Space, Rolls Royce, and AirTanker attended the ceremony.

“Today’s signing ceremony marks the accomplishment of a cooperative effort that started three years ago. It has been a long process, but the result is an unrivalled contract in terms of scope, performance and price. This contract demonstrates the value of competition and the collaboration across nations to respond to common defence and security requirements. I want to thank Airbus and our industry partners for their cooperation and valuable contribution during the negotiations. I’m so proud of the NSPA team who demonstrated the value of our lifecycle approach in support of modern defence systems to the benefit of the Alliance.”, stated NSPA General Manager, Ms Stacy Cummings.

Initiated by the European Defence Agency (EDA) in 2012 and managed by the NSPA, the Multinational MRTT Fleet comprises Germany, Netherlands, Belgium, Norway, Luxembourg, and the Czech Republic, who have the exclusive rights to operate the NATO–owned aircraft in a pooling and sharing arrangement. The MMF stands as a prime example of effective cooperation between NATO and the European Union when delivering critical capabilities to their members. To date, five out of nine aircraft ordered have been delivered, with two subsequent deliveries expected in the coming days.