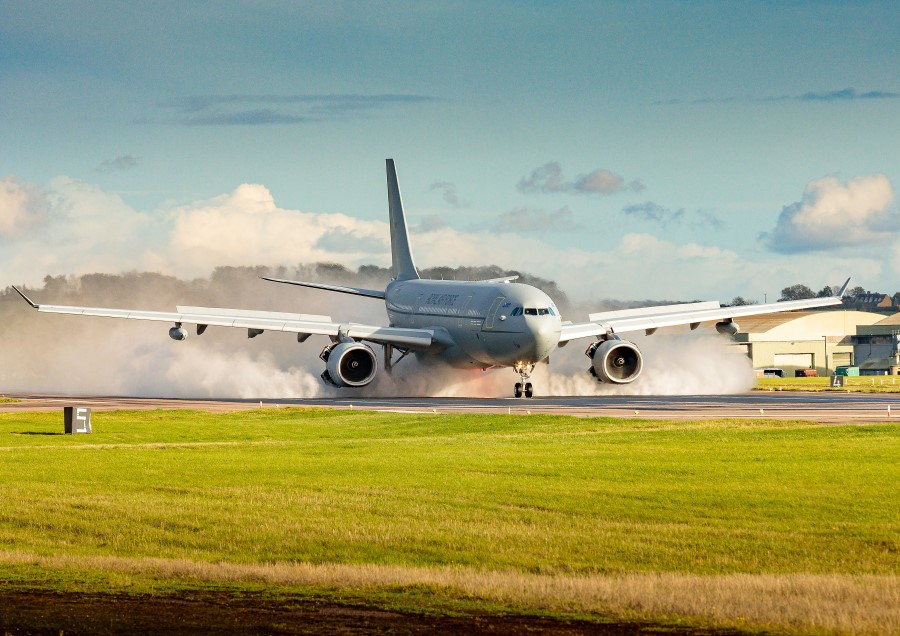 The Royal Air Force and industry partners have carried out a world-first 100% sustainable fuel flight using a military aircraft of its size, and the first of any aircraft type in the UK.

A RAF Voyager – the military variant of an Airbus A330 – took to the skies over Oxfordshire powered entirely by 100% sustainable aviation fuel (SAF), paving the way for a range of possibilities for the future of flying military and civilian aircraft. The flight, which took place on Wednesday, was a joint endeavour between the RAF, DE&S and industry partners Airbus, AirTanker and Rolls-Royce, with the fuel supplied by Air BP.

Sustainable aviation fuel – which is made from waste-based sustainable feedstocks, such as used cooking oil – reduces lifecycle carbon emissions on average by up to 80% compared to the conventional jet fuel it replaces, this lessens the RAF’s reliance on global supply chains, and improves operational resilience.

The Royal Air Force has flown the UK’s first military air transport flight using 100% sustainable aviation fuel on one of their operational Voyager aircraft. They should be rightly proud of this achievement; it is a breakthrough moment for the RAF and an exciting development for the MOD. Through the RAF’s pioneering spirit, expertise and partnership with UK industry, British science and engineering is leading the way in improving operational resilience and developing future operating capability in a climate-changed world. Baroness Goldie Defence Minister

Different approaches will suit different platforms and environments. As such, a range of alternative fuel options are being looked at to ensure the UK is at the forefront of this developing technology.

This success follows last November’s small aircraft UK flight powered by 15 litres of synthetic gasoline – another world-first led by the RAF. Synthetic fuel is made from water and carbon dioxide, which is then put under pressure and an electric current run through it.

The 90-minute flight from RAF Brize Norton, flown by a combined RAF, Rolls-Royce and Airbus flight test crew, replicated an air-to-air refuelling sortie and was witnessed by senior RAF and industry representatives. It demonstrated the RAF’s potential for its future operational capability, ensuring the ability to contribute to UK defence wherever and whenever required.

Engineers from Airbus’ Commercial Aircraft and Defence and Space divisions have been working with the RAF, Rolls-Royce and Airtanker testing the aircraft’s performance and handling on the ground and in the air in preparation for the final flight with both engines powered by 100% SAF.

This breakthrough test flight is just one of the ways the RAF is actively working to reduce life cycle carbon emissions produced by flying its aircraft. Other innovations have included a world-first, record breaking microlight flight using synthetic fuel, flying an electric aircraft at RAF Cranwell and creating fuel from genetically modified bacteria.

While continuing to fulfil the priority focus of protecting the nation, the sustainable aviation fuel could mark a step-change towards the RAF’s goal to be Net Zero by 2040. Working towards the Government’s Net Zero 2050 goal and Jet Zero Strategy, the RAF also plans for their first Net Zero airbase by 2025.

In addition to supporting the use of Sustainable Aviation Fuel in the Armed Forces, the Royal Air Force Commander in Chief HM King Charles III has also supported an increase in its adoption in the private sector though the Sustainable Markets Initiative. The SMI is a network of global CEOs from across all industries, working together to accelerate a sustainable future in line with its mandate. Part of the SMI’s work is raising awareness of SAF amongst the business community and encourage greater SAF uptake in corporate travel in addition to increased purchase agreements to encourage demand from the public and private sectors.