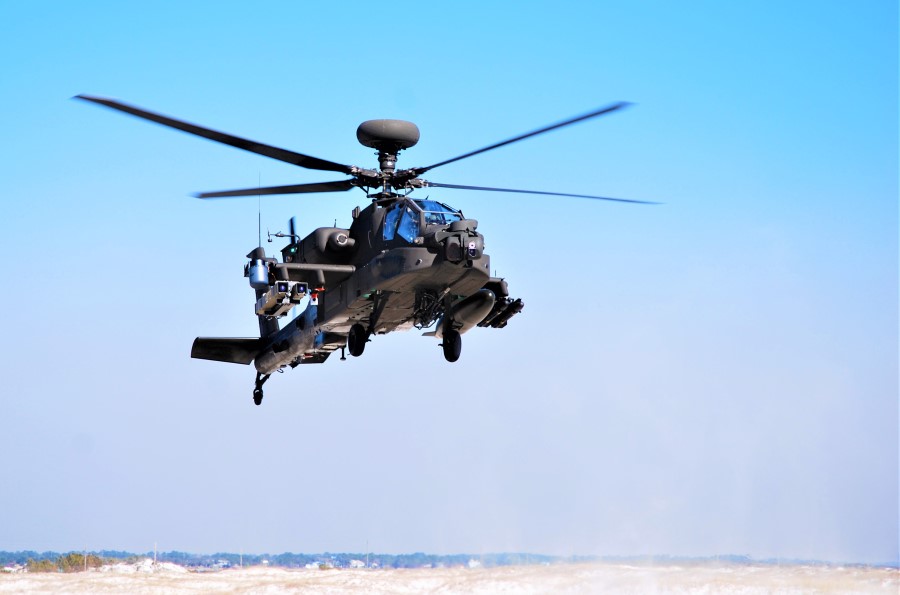 “We were excited to test a new weapon system here at Eglin,” said Amanda Hargett, 780th TS test engineer. “Our team worked closely with the Army to make sure everything went smoothly and the demonstration was successful.”

The U.S. Army Futures Command Future Vertical Lift Cross Functional Team and the Combat Capabilities Development Command Aviation and Missile Center brought the AH-64 here for the evaluation. The demonstration was broken down into four days.

Day 1 – Modifications were made to the aircraft and the weapon was set up. Testers checked all flight and ground systems to make sure they were working correctly and with the weapon and any test telemetry added to the aircraft.

Day 2,3 – The test teams went through rehearsals and performed practice shots. This benefited the pilots and test support teams to make sure everyone knew where to be and what would most likely happen during the actual test. It also ensured all systems were working in flight and allowed the team to plan for any unforeseen emergency procedures.

Day 4 – This was the actual test day. The Apache launched the Spike from 32 kilometers away and scored a direct hit on a stationary vessel.
Another planned flight that included a strike on a moving target, was cancelled due to weather.

Based on the success of testing, the Spike NLOS will serve as an interim solution to the gap in precision targeting at extended ranges. The weapon can strike targets four times further than the Apache’s current carried munitions. It also serves a dual purpose in informing the requirements for Army Aviation’s enduring standoff weapon, the Long-Range Precision Munition.

“We appreciate the tremendous support of the 780th for this program,” said Chief Warrant Officer 5 Scott Durrer, Future Vertical Lift Cross Functional Team Lethality Technical Advisor. “The unit provided everything we needed to help us accomplish this critical maritime assessment.”