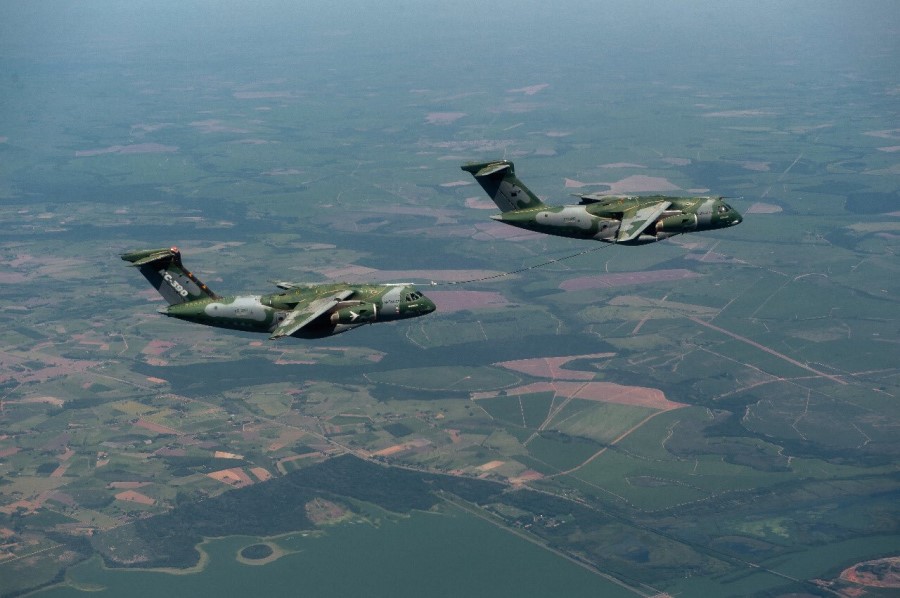 The KC-390 Millennium project has made another important leap in the development and certification of its operational capabilities. On March 26, in Gavião Peixoto (SP), in-flight refueling tests (REVO) were carried out using two KC-390 aircraft. The aircraft that received the fuel was certified to perform the refueling operation in flight of another KC-390 aircraft that was part of the flight.

After intense development of the control laws (fly-by-wire) and verification of the functionalities of the fuel system, pilots and test engineers of the Institute of Research and Flight Testing (IPEV), Military Organization subordinated to the Department of Aerospace Science and Technology (DCTA), performed the certification flight. The objective was to verify the versatility of the aircraft in performing the refueling process in flight, that is, from its positioning in relation to the refueling plane to the coupling of the hose to perform the fuel transfer. All activities were supervised by engineers from the Institute for Industrial Promotion and Coordination (IFI), responsible for the certification process.

Clique aqui para baixar a imagem originalBefore the certification flight, the test team, composed of pilots and engineers, executed flights in embraer’s engineering simulator in order to have contact with the solutions implemented in the aircraft. A control law, (behavior that the aircraft has based on flight commands operated by the pilot) was developed specifically for the function of the receiving aircraft. “The simulator checks were important for understanding the company’s proposal and for the behavior of the aircraft’s flight characteristics with the law developed,” said Major Aviator André Marques Peixoto, ipev test pilot.

After the tests in the simulator was made a flight to adapt the crew of fab, which involved refueling within the speed and altitude proposed to be used operationally in REVO missions. Then, it was the turn of the certification flight, with the transfer of fuel in the most critical conditions found, which allowed the verification of the aircraft in less favorable conditions.

“The KC-390 pair certification flight is an important milestone in the project. The piloting characteristics of the aircraft with the law developed were well suited and intuitive to the pilot, allowing precise piloting, which increases the chances of success in the REVO mission, which by itself already has operational difficulties related to the nature of the mission with an aircraft the size of the KC-390”, complements the Director of IPEV and test pilot who participated in the certification flight , Colonel Aviator Marcelo Zampier Bussmann.

At the end of the process the operational aircraft will receive modifications to use the REVO features, which will allow the First Troop Transport Group (1st GTT) – Zeus Squadron, which already operates the aircraft, to carry out this action of Air Force, maximizing the use capacity of the KC-390 Millennium aircraft.