Borsuk IFV on trials in the Polish 15th Brigade 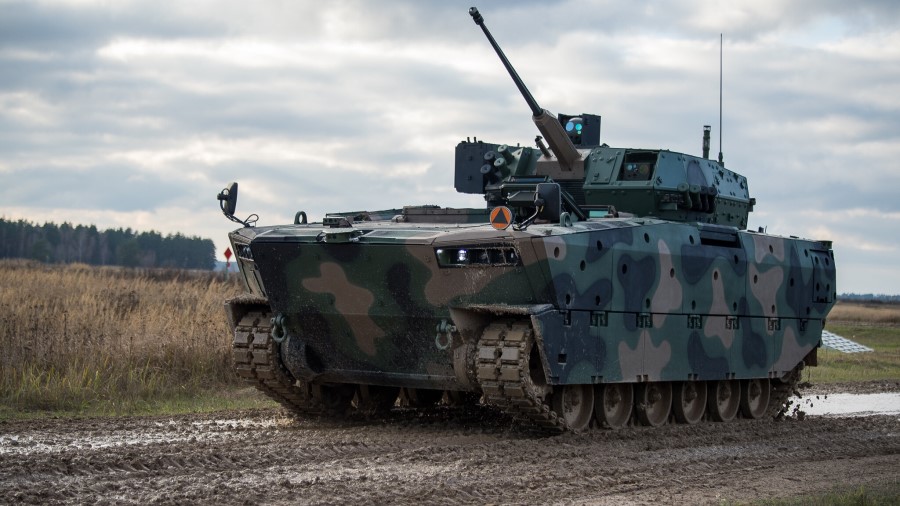 On November 14, the presentation of the BORSUK infantry fighting vehicle, which is currently undergoing qualification tests, took place at the Land Forces Training Center in Orzysz.

Qualification tests of the BORSUK infantry fighting vehicle (IFV), which are expected to be completed in 2023, are carried out both at the Military Institute of Armor and Automotive Technology and at training ground training centers. Currently conducted as part of the first stage of research, which should be completed by mid-2023 at the latest, cognitive tests for the needs of soldiers of the 16th Mechanized Division, which will be the first recipient of these vehicles in the Polish Armed Forces, are aimed at familiarizing future users with the vehicle in terms of its functionalities and field and fire capabilities, as well as the specificity of using the new weapon system in the operations of mechanized subunits. In addition, soldiers will be able to submit comments and observations regarding the need to introduce possible changes enhancing the functionalities of BORSUK IFV.

It is the first stage of the qualification tests that is to verify the capabilities of the BORSUK IFV in terms of off-road capability and in terms of overcoming deep water obstacles, fire capabilities as well as ballistic and anti-mine resistance. The planned second stage, which is only an element of supplementary research, will involve checking ICT systems.

The tests of the vehicle are carried out by the Testing Group from the Military Institute of Armor and Automotive Technology, under the supervision of the Qualification Testing Committee, which includes representatives of: the Armament Agency, the General Staff of the Polish Army, the General Command of the Armed Forces, the Inspectorate for Armed Forces Support, the Department of Innovation of the Ministry of Defense National, 15th Mechanized Brigade, National Center for Research and Development and Huta Stalowa Wola S.A.

Positive completion of the tests will enable the commencement of the negotiation process regarding the launch of serial production and contracting the deliveries of the BORSUK IFV for the Polish Armed Forces. It is worth emphasizing that it is the BORSUK IFV that is the fundamental answer to the current and prospective needs of mechanized troops and it will be the dominant solution in this area in the Polish Armed Forces in the future. Along with the development of the structures and size of the army, regardless of the possible implementation of heavy infantry fighting vehicles for the needs of the 18th Mechanized Division, the future needs for the supply of BORSUK IFVs will significantly exceed 1,000 vehicles, and the generational replacement process of post-Soviet BWP-1s will require intensification of the contractor’s production capacity, in order to strengthen the defense potential of the Polish Armed Forces as urgently as possible.

BORSUK is being developed on the basis of an agreement concluded between the National Center for Research and Development (NCBR) and a consortium of Polish entities, whose leader is Huta Stalowa Wola S.A. It is worth noting that on April 28, additional four prototypes were contracted, which will be used to carry out checks in the system environment, the results of which, in turn, will translate into the implementation of improvements in the target configuration of the BORSUK IFV and the development of the product as part of subsequent production tranches.

It is worth mentioning here that the contractor is also working on the construction and development of an experimental vehicle for the entire project of the New Amphibious Infantry Fighting Vehicle, including other vehicles that will be based on a universal modular tracked platform (UMPG). This vehicle will be used to test further innovative and alternative solutions that may be used in other vehicles based on the UMPG platform in the future.

IFV BORSUK consists of a universal modular tracked platform (UMPG) and a remotely controlled turret system (ZSSW). The crew consists of 3 soldiers: commander, weapons operator and driver. The vehicle is designed to transport 6 soldiers to the battlefield area, while ensuring an appropriate level of protection, as well as to carry out tasks related to supporting infantry subunits with the use of on-board weapons. The vehicle, using the on-board weapon system, has the ability to fight infantry, armored vehicles, air targets and other objects used by the enemy, in all weather conditions and at any time of the day. The BORSUK IFV will also be a very effective tool in terms of cooperation with sub-units of the K2 family tanks, which will become part of the equipment of, among others, 16th Mechanized Division. The vehicle is characterized by high mobility and the ability to overcome terrain obstacles, including water obstacles by swimming, and can also be operated in various climatic conditions. The maximum speed when moving on hardened roads is 65 km/h, and swimming 8 km/h. Combat weight in the basic variant is 28 tons.

A very important element of the BORSUK is the already mentioned, developed by Huta Stalowa Wola S.A. together with WB Electronics S.A., the ZSSW-30 remotely controlled turret system, the main armament of which is the Bushmaster Mk.44S autocannon, which enables firing in automatic and semi-automatic modes, using five different types of ammunition, including programmable ammunition. The auxiliary armament integrated with the turret is a modified 7.62 mm UKM-2000C machine gun coupled with the cannon. Additional armament is a double SPIKE-LR anti-tank guided missile launcher, and it is worth noting that it is also planned to launch works aimed at enabling the use of other types of missiles.