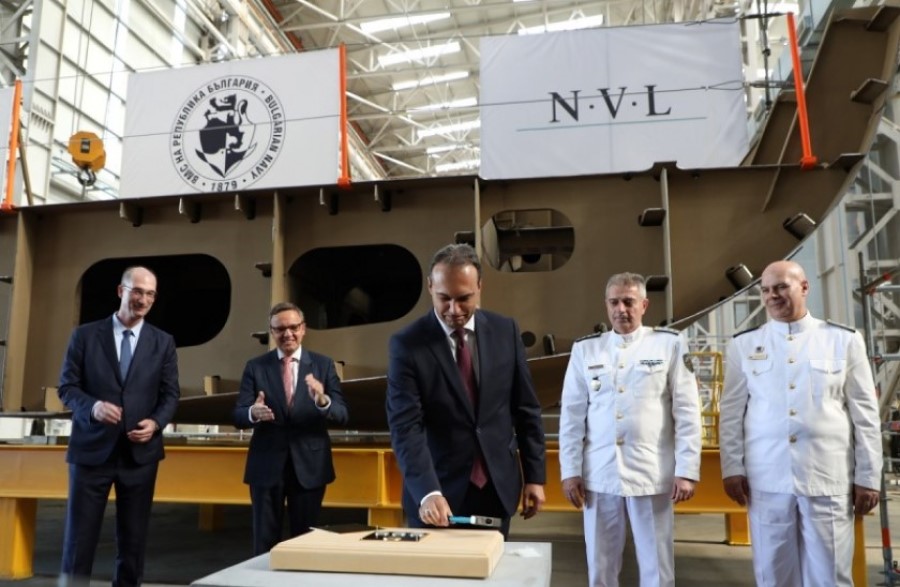 On June 17, at the MTG-Delfin PLC shipyard in Varna, the keel-laying ceremony of the first of the two multipurpose modular MMPV patrol ships ordered by the Ministry of Defense of the Republic of Bulgaria at Naval Vessels Lürssen B.V. & Co.KG.

As announced by the Bulgarian Navy commander, the ship will be named Hrabri. The name of the twin patrol ship has not been released. The ceremonial commencement of sheet metal cutting took place in Varna last December. Their order is the largest investment in the development of the Bulgarian Navy – the project has a value of EUR 420 million and will allow the replacement of some of the currently operated vessels. In recent years, Bulgarians have purchased used Tripartite MCM’s (three) and Wielingen type frigates (also three).

The Lürssen OPV 90 model was chosen as the MMPV platform, which is a development of four Darussalam patrol ships built in 2011-2014 for the Sultanate of Brunei. The production of the Arafura series of 12 OPVs for the Royal Australian Navy is also ongoing, representing a further evolution of this design. Bulgarian MMPVs will have a displacement of 2,300 tons, dimensions of 90 × 13.5 m and a speed of 20 knots. The range will be 3000 NM at 14 knots, and the autonomy will be seven days. The crews will be about 70 people, including air service. Saab’s 9LV integrated combat management system was selected for the MMPV. According to the contract, the prototype must be delivered by the end of 2025. Work on the twin unit will start in the first half of 2023.