Ceremony for the major submarine contracts between Norway and Germany 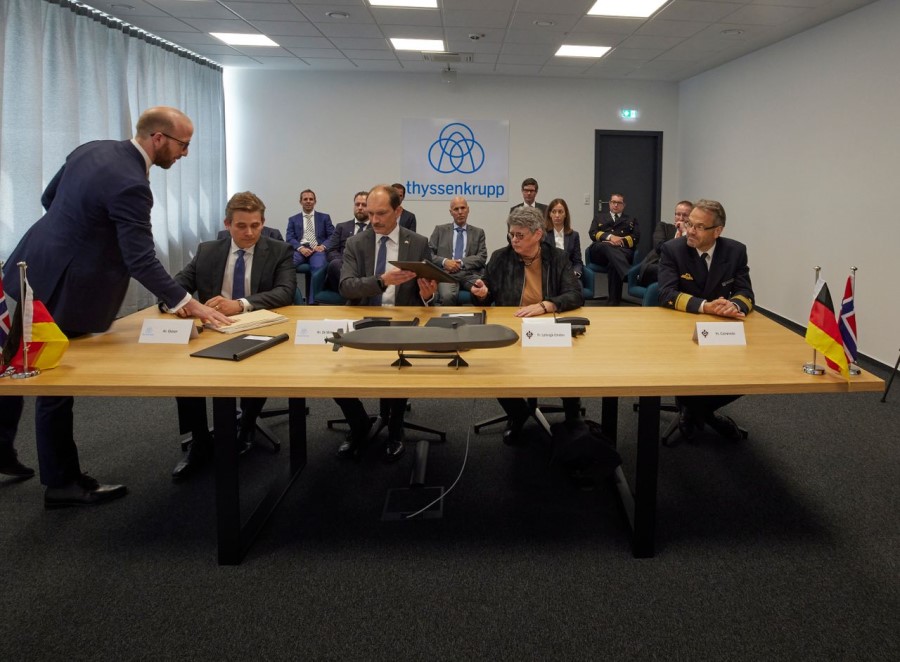 thyssenkrupp Marine Systems has officially been commissioned to build six identical Type 212CD submarines. The procurement organizations of Norway and Germany have already signed the corresponding contracts. Worth approx. € 5.5 billion, the order comprises the delivery of two submarines for the German Navy and four submarines for the Norwegian Navy plus additional logistical services and training resources.

Today, the festive ceremony to mark the occasion of the major order took place at the shipyard location in Kiel, in compliance with strict hygiene and preventive measures. Special guests of honour were the German State Secretary, Benedikt Zimmer, and the Norwegian State Secretary, Tone Skogen.

The guests of honour were welcomed by Dr. Alexander Orellano, Chief Operating Officer, and Paul Glaser, Chief Financial Officer, of thyssenkrupp Marine Systems. Dr. Orellano emphasised in his address: “The German-Norwegian 212CD contracts are a milestone in the long history of our company and an enormous step into the future. With the 212CD submarines, we are opening up a new chapter of state-of-the-art submarine technology with increased operational availability and at the same time reduced cost over the whole lifecycle. By joining the forces of companies in Germany and Norway – in particular with the significant involvement of kta naval systems in Norway, a joint venture between Kongsberg Defence & Aerospace, thyssenkrupp Marine Systems and ATLAS ELEKTRONIK – we are fostering a value-adding German-Norwegian industrial partnership to the benefit of highly specialized industrial jobs in both countries. It is an honour for us that both navies have trusted thyssenkrupp Marine Systems to be the partner on the way to a new era of submarine operations.”

During the shipyard tour, the state-of-the-art submarine production facility was impressively presented and the guests had the opportunity to gain an insight into the production process and to meet employees of thyssenkrupp Marine Systems.

A subsequent unveiling of the 212CD models and an anti-ship missile, NSM, gave a preview of the design of the new submarine class. The NSM missiles are produced in Norway by KONGSBERG Defence & Aerospace (kda). Kjetil Myhra, Executive Vice President of kda, emphasized: “We are honoured to be part of the Type 212CD programme delivering the ORCCA Combat System in close cooperation with tkMS, kta naval systems and Atlas Elektronik. Our close and strong relationship with tkMS stretches back more than 50 years and the Type 212CD programme is a foundation for close cooperation for decades to come. We thank tkMS for their continued support and trust in KONGSBERG. I would also like to use this opportunity to emphasize that this materiel cooperation is more than just cooperation between our two countries’ defences – it will also result in new constellations of cross-border cooperation between industries, where German and Norwegian missile expertise are collaborating on developing the next-generation anti-ship missile, NSM. This kind of cross-border cooperation will help push technology development even further, and it will create growth within the industry in both nations. We are therefore proud to be a part of this historic event and we look forward to the exciting times ahead.”

“Our trusting cooperation with Norway will be significantly intensified by the joint procurement of submarines and anti-ship missiles. In this way, our two countries are making an essential contribution to Europe’s defence capability. The cooperation has a long-term focus and supports key technologies in the field of underwater platforms as well as in the field of the latest generation of guided missiles. All in all, this results in a ‘win-win situation’ for both nations and for the respective industries.

It is good to have Norway as a partner at our side and at the same time to set an example for successful European cooperation. The participation of further partners would further strengthen the synergy effects for Europe and NATO and would therefore be very welcome,” is how State Secretary Benedikt Zimmer assessed the bi-national submarine project.

The long-standing ties between the two countries were underlined by Norwegian State Secretary Tone Skogen: “This ambitious cooperation connects Norway and Germany even closer together, and we are already seeing the synergies it creates, within both the military and the civilian domain. This will create increased economic opportunities and high-tech jobs in both our countries. I am certain that cooperation is the way to go for our industries to become more competitive on the world arena. Hopefully, this can be an inspiration for others to join our project.”

Details of the Type 212CD submarine. The new German-Norwegian submarine type is based on the Type 212A which is already in service with the German Navy and also with the Italian naval forces, and bears the designation 212CD (Common Design).

The new ORCCA combat system from kta naval systems will be able to process even more sensor data than ever before. This gives crews new situational awareness capabilities and, at the same time, an enhanced ability for networking with allied units. A significantly reduced sonar signature of the Type 212CD is intended to prevent potential adversaries from locating the boats, despite improved detection methods.

thyssenkrupp Marine Systems will also ensure synergies for the operation, logistics and maintenance of the new boats. This will increase the operational availability of the submarines and reduce in-service expenses.

Construction of the new submarines will start in 2023 and delivery to the Norwegian Navy is planned as early as 2029. The first submarine for the German Navy will be delivered in 2032. The contract includes extensive additional logistical services and training resources, including simulators in particular.

The German Federal Office of Bundeswehr Equipment, Information Technology and In-Service Support (BAAINBw) and the Norwegian Defence Materiel Agency (NDMA) are setting up a joint programme office in Kiel. This will allow the production and delivery of the Norwegian and German submarines to be closely monitored by the customers.