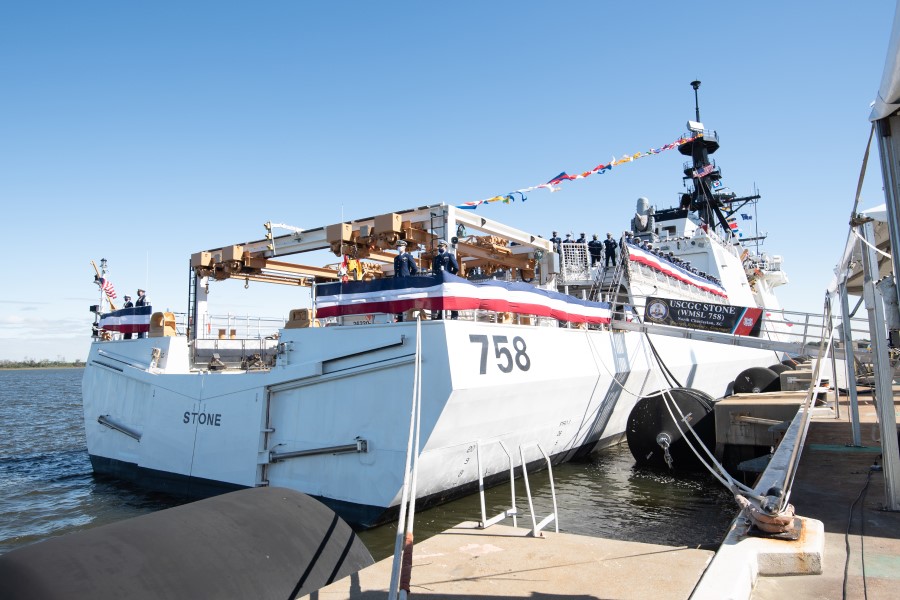 Ms. Laura Cavallo, the grandniece of the ship’s namesake and ship’s sponsor, was also in attendance.

The cutter’s namesake comes from Cmdr. Elmer “Archie” Fowler Stone, who in 1917 became the Coast Guard’s first aviator and, two years later, was the pilot of the NC-4, a Navy airplane, which in 1919 was the first aircraft to accomplish a trans-Atlantic flight, landing in Portugal.

They are 418 feet in length, 54 feet in beam, and 4,600 long tons in displacement. They have a top speed of more than 28 knots, a range of 12,000 nautical miles, an endurance of up to 90 days, and can hold a crew of up to 150. These new cutters are replacing the high endurance Hamilton-class cutters in service since the 1960s.

Taking the newly-accepted cutter on its shakedown cruise, Stone’s crew covered over 21,000 miles (18,250 nautical miles) over 68 days. A mutual interest in combating IUUF activities offered an opportunity to collaborate for Stone’s crew. They interacted with partners in Guyana, Brazil, Uruguay, and Portugal, strengthening relationships and laying the foundation for increased partnerships to counter illicit maritime activity.

Ship commissioning is the act or ceremony of placing a ship in active service.