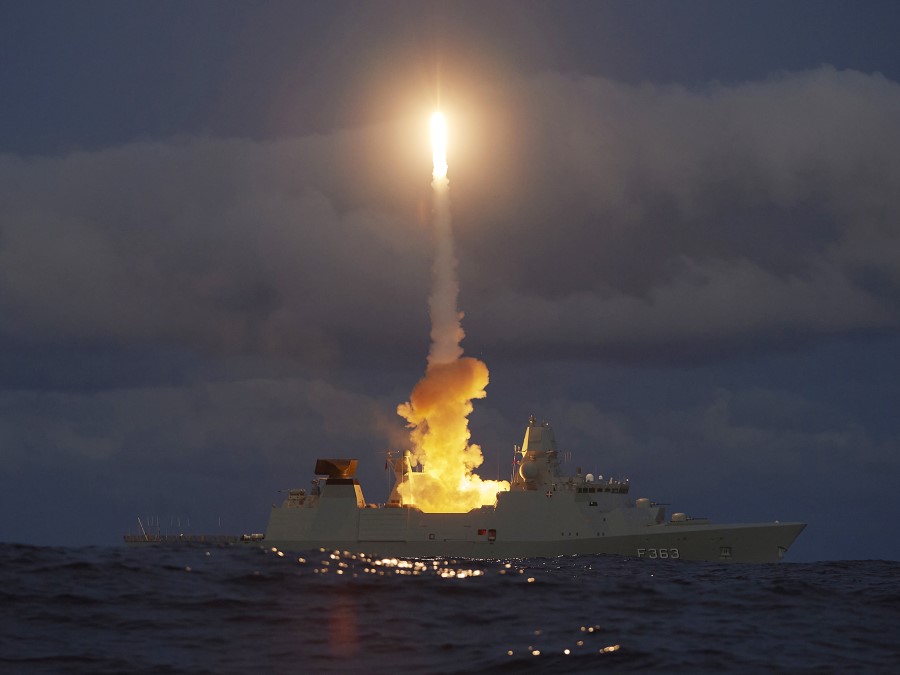 Last night, the first SM-2 missile was fired from a Danish warship. The Danish Defence and the Ministry of Defence’s Materiel and Procurement Agency are integrating the SM-2 missiles for use in the Danish frigates of the Iver Huitfeldt class. This means that going forward, the frigates will be able to shoot down enemy aircraft from afar.

When an SM-2 missile was fired from a Danish ship last night for the first time ever, there was an intense but focused atmosphere on board. The entire ship’s crew was in place at their posts while waiting for the characteristic sound that can be heard anywhere on the ship when a missile leaves the launch well.

In the ship’s operating room, from which the launch was controlled, all operators had their full attention directed to the task: a safe and successful launch.

When the button was pressed and the missile cruised successfully to the sky, however, there was room for a smile on the focused faces. For the first time ever, a Danish warship had fired an SM-2 missile. The shooting is a so-called First of Class (FOC) shooting, and it is the Ministry of Defense’s Materiel and Procurement Board that conducts it on the frigate Niels Juel. This is a big step towards getting the three Iver Huitfeldt-class frigates equipped with SM-2 missiles.

“It is a very important milestone to have the missiles tested on our Iver Huitfeldt class frigates. When we subsequently get the missiles installed on the three frigates in the class, you can really exploit these units for what they were originally purchased and designed for, namely area air defense. The frigates already have radars and other sensors and a well-trained crew, which together enable the frigates to closely and accurately monitor airspace and quickly detect enemy aircraft or missiles. With the SM-2 missiles, the frigates will be able to shoot down these possibly enemy aircraft and missiles at a longer distance, and they will thus contribute significantly to, among other things, the air defense of Denmark. It simply makes the frigates better for air defense, which is important in relation to the defense of Denmark and supports the demand from NATO,” says Rear Admiral Torben Mikkelsen, head of the Naval Command.

When the new missiles are fully phased in, the frigates can move out at short notice for defense tasks both in conflict areas around the world and as defense of Denmark and Danish territory.

At the same time, the upgrade means that the frigates will become more valuable to NATO, as the ability to deploy a ship that has sensors and weapons that together can protect airspace is something NATO is very much in demand. Denmark’s contribution to NATO will thus be improved.

Prior to today’s launch, the Ministry of Defense’s Materiel and Procurement Agency (FMI) has been preparing for several years for the missile’s installation and testing. The acquisition consists of several parts. The missile itself is procured through the US Navy, US Navy. But in addition to the acquisition of these, FMI has done a lot of work to update electronics and software on board the frigate, which allows the missile to be integrated with the ship’s other systems.

Likewise, FMI has prepared the so-called MK41 launcher, which was built into the ships from the start and from which the missiles are launched. On land, storage space and workshop for the missiles have been set up at the same time.

“We have been working for many years to implement this capability. It is therefore a great pleasure that everything everyone has been working towards came together in a very successful first shooting last night. Now we look forward to being able to use the data we have from the test firing for the further work towards a final implementation of the missile system,” says Anders Skeel Bytzau, project manager for the acquisition of the SM-2 missile system at the Ministry of Defence’s Materiel and Procurement Agency.

Area defense
The typical task of the new missiles will be to contribute to an area defense.

“Area defense is essential for a naval force or an aircraft carrier group to operate freely. With the SM-2 missiles, the Danish frigates can much better escort other ships and protect a naval force, and the area the naval force is in, against enemy missiles or aircraft,” says the ship’s commander on the frigate Niels Juel, Lieutenant Commander Simon E. Schultz-Larsen.

Niels Juel is the first Danish frigate to shoot with the new missiles. The missile launch is a test that all the systems work and interact correctly. It happens this week in a shooting range at sea at Andôya Space Defence (ASD) in the northern part of Norway.

“When we test the missiles, it is not just a milestone for Denmark and the Danish defence. It is also a big event for the ship and crew. We’ve clearly been looking forward to the shooting – and the crew has been working intensely and purposefully for a long time on the night’s events. Now we have a capability on board that significantly moves the frigate Niels Juel and our sister ships up in relation to naval usability for Denmark and NATO. It was clear to feel that we were all just straightening our backs one more time when it was all well over. Niels Juel has a dedicated and professional crew – and I am proud of their approach to the task,” says the ship’s manager at Niels Juel.