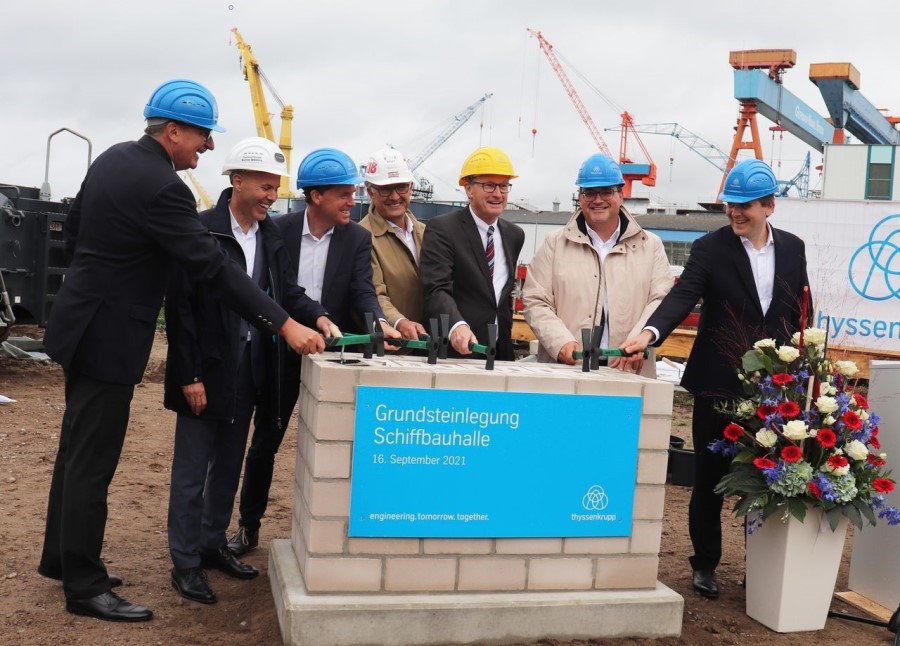 At the thyssenkrupp Marine Systems shipyard in Kiel, Chairman of the Supervisory Board Oliver Burkhard, Chief Operating Officer (COO) Dr Alexander Orellano, Minister of Economics Dr Bernd Buchholz, Kiel’s Lord Mayor Dr Ulf Kämpfer and other guests today jointly laid the foundation stone for our new shipbuilding hall. The hall, which is located directly on the “Kieler Förde”, will be used to build 212 CD submarines from 2023. The shipbuilding hall is part of a site concept in which thyssenkrupp AG is investing around 250 million euros.

Oliver Burkhard, Chairman of the Supervisory Board: “The new building is a strong signal for the future of the shipyard. We have kept our word and follow up announcements with deeds. The investment is a major one for thyssenkrupp as a whole. It shows: thyssenkrupp is convinced that the naval sector will pay off for us in the long term.”

Interlocking planning of the individual steps of engineering, purchasing and production will mean that we will work more safely and efficiently in this new hall.

Dr Alexander Orellano, COO: “The new shipbuilding hall marks the beginning of a new era: our company will be fit for the future, with the upcoming major order we are well utilised for the coming years and with the new production facilities we can continue on our growth path.”

In July, thyssenkrupp Marine Systems received an order from Norway and Germany to build six Class 212 CD submarines. The new shipbuilding hall is thus well utilised. The last submarine will be delivered in 2034.

Dr Bernd Buchholz, Minister of Economic Affairs: “Despite all the current problems that currently characterise shipbuilding in Germany, the laying of the foundation stone associated with this investment is living proof of the industry’s courage and future viability.”

The new shipbuilding hall is scheduled to be handed over to thyssenkrupp Marine Systems at the end of June 2023. It will stand directly on the fjord and, alongside the old halls and the gantry cranes, will significantly change Kiel’s cityscape.

Dr Ulf Kämpfer, Lord Mayor of Kiel: “thyssenkrupp Marine Systems is the largest industrial company in the state capital. This investment is an important signal that industry in Kiel enjoys good framework conditions. The numerous service providers and suppliers in the city and the region also benefit from this. The new building and the entire location concept also stand for the good cooperation that exists between tk MS and the city in many areas”.

Traditionally, a time capsule was bricked into the foundation stone. For this special building, apprentices in our training workshop made the time capsule in the shape of a submarine. It contains a daily newspaper, a coin, a construction plan and a letter.