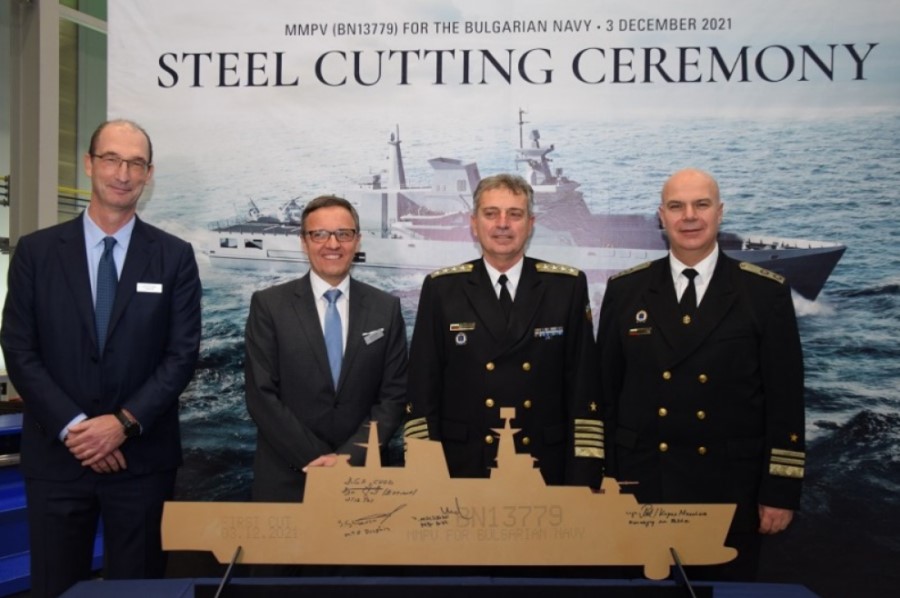 “This is not just the beginning of a technological process, but the fulfillment of a dream. This is a historic moment for the Navy and for the Bulgarian Army”, said The Chief of Defense Admiral Emil Eftimov today, December 3, at the solemn ceremony on cutting steel for the first of two new multifunctional modular patrol ships for our Navy. The event took place in the area of the Shiprepair and Shipbuilding Plant “MTG-Delfin” in the town of Varna. Varna.

“Bulgaria is well known for its capabilities in shipbuilding, but for the first time together we put our country on the map of military shipbuilding,” the head of defense said. He pointed out that since tsar’s time the Bulgarian Navy has not received new warships, but auxiliary ships – since the mid-1980s. Admiral Emil Eftimov expressed gratitude to the generations of admirals and officers who worked for the modernization of our Naval Forces, as well as for the realization of the specific project. He expressed appreciation for the professionalism and trust invested in the preparation and implementation of the complex project by the German partner company, as well as for the built capacity and capabilities of the team in the Bulgarian company involved in the construction of the new ships.

“We have the task of forming the crews, participating in the process of building the ships and descending them on water to have mastered
them. This is a responsible task, but I am convinced that you will cope,” Admiral Effimov told the Commander of the Navy Rear Admiral Kiril Mihaylov. The chief of defence was adamant that efforts should be focused on making the costly defence resource a reliable deterrent.
The first launch of the specialized high-tech system for plasma cutting of steel was made by Admiral Emil Eftimov, Rear Admiral Kiril Mihaylov, the representative of “Lursen” Company Dirk Malgovski and the Executive Director of “MTG-Delfin” Svetlin Stoyanov.
The new ships, which will be approximately 90 metres long and have a displacement of about 2,300 tonnes each, will have an integrated combat management system. At the different stages of their production will participate 500-600 specialists and workers. With the implementation of the contract between the Ministry of Defence and the German company Lursen, two multifunctional modular patrol ships will be acquired, with the ability to participate in a wide range of naval operations of THE EU to replace some of the ships available in the Navy, not subject to modernization.

“I am happy that what we could only dream of more than 15 years ago – to have new ships in the Navy is about to become a reality today,” said Navy Commander Rear Admiral Kiril Mihaylov.

“The capabilities that new warships will bring to the Navy will allow us not only to fulfill our constitutional obligations, but also to be an equal member of the alliances in which we participate,” he stressed. “The first ship, as recorded in the treaty, must be lowered to water by the end of 2025,” Admiral Emil Eftimov said in response to questions from journalists. He explained that the financial resources needed to implement the project are guaranteed, and the next payment will be in January 2022 “Until the adoption of the first new ship in construction of the Navy in 2025, there is a lot of work to be done related to the formation of the crews and their training, as this is a complex technical facility that requires a whole other level of knowledge and preparation”, pointed to Rear Admiral Kiril Mihaylov. He expressed confidence that the Navy will deal with this task because they have good potential and a solid base. “We are doing everything we can to keep our ships in good technical condition, so none of the tasks that lie before the Navy have gone unfulfilled regardless of the age of the ships we operate. We try to keep them in a state where they can perform their tasks,” the Navy commander said.