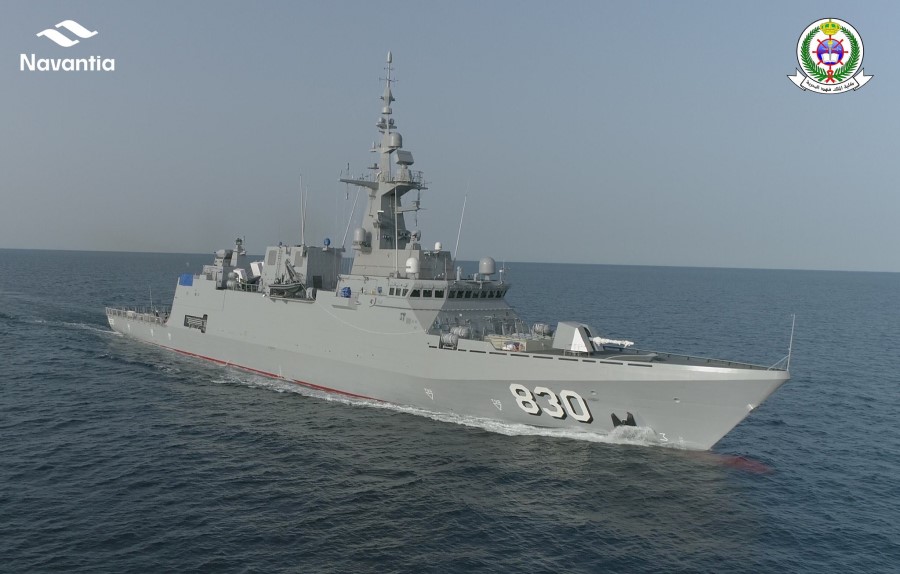 Navantia delivered the second of the five corvettes built for the Royal Saudi Navy Forces (RSNF) in its shipyards at the Bay of Cadiz, the construction 547, named AL-DIRIYAH, in a ceremony held at its San Fernando facilities.

AL-DIRIYAH has been delivered to the Royal Saudi Navy three years after its first cut of steel (May 2019), meeting demanding deadlines despite the health pandemic and global supply stress. The corvette is one of the most competitive and capable vessels in its segment, as it has been confirmed in the sea trials undergone in the Bay of Cadiz.

The commissioning ceremony took place in accordance with military protocol. An inspection commission (made up by members of RSNF and Navantia) has boarded the corvette to carry out the mandatory review. At the end, the ship’s flag was raised, after which the Saudi Navy transferred command of the corvette to the commander of AL-DIRIYAH. Navantia Chairman has given Vice Admiral Al-Ghofaily the ship’s bell as a ceremonial gift.

In the event, Vice Admiral Al-Ghofaily highlighted that “Alsarawat and many other RSNF ambitious acquisition programs are a clear commitment of the Royal Saudi Naval Forces toward fulfilling the strategic goals of the kingdom vision 2030 by creating a new era of sophisticated and efficient Naval capabilities to face the challenges of today and tomorrow while increasing the strength of National domestic military industry”.

He emphasized that he commissioning marks the final and major milestone of her manufacturing life, that lasted for 38 months during which best technologies were devoted to her construction and integration with the leading-edge combat systems. Since last January, the ship has gone through intensive sea trials to become, today, ready and fully capable to perform her assigned missions protecting the Kingdom of Saudi Arabia and defending its interests. He added that such significant achievement “is a clear indication of Navantia’s capabilities and its determination to attain remarkable success in Alsarawat project”.

all, for the endless support that they always give to the Royal Saudi Naval Forces”.

Spanish Secretary of State for Defense stated that “this ship is an excellent example of the quality of the Spanish shipyards, of the industrial and commercial cooperation between our countries, which has guaranteed the economic activity of more than a hundred companies and 6,000 jobs in the Bay of Cadiz”. “To the corvette AL-DIRIYAH, to her officers and crew peace, fair sea and winds”.

Mr. Ricardo Dominguez expressed gratefulness for “the contribution and collaboration of everyone involved in the great task carried out by the shipyard delivering state-of-the-art products and services and thus showing the world the capabilities” of the company.

“Arabia has relied on Navantia to provide a decisive capacity to achieve the country’s strategic objectives in the maritime field, and Navantia is willing to contribute further to enrich and support any initiative to create a local capability for naval shipbuilding, as a trustful and reliable partner”, he said.

The director of Navantia’s corvettes programme, José Antonio Rodríguez Poch, has also thanked the workforce, the auxiliary and support industry, the Navy and the classification societies for their contribution to the success of the programme.

The CEO of SAMI has stated that “this is a moment of both achievement and pride for the Saudi Defense industry as the Royal Saudi Naval Forces fleet officially commissions HMS Diriyah”.

“This could not have been possible without the support and guidance we continue to receive from the wise leadership of our beloved country. I would also like to extend our appreciation and gratitude to the Royal Saudi Naval Forces for their trust in us. Our cooperation with Navantia resulted in the establishment of our joint venture, SAMINavantia, which developed the first Saudi naval Combat Management System – HAZEM, thus contributing to the localization of the defense sector through the transfer of technology and nurturing our exceptional Saudi talents. We will continue to leverage the unique strengths of our partnerships with leading global OEMs to support the development of a self-sufficient national defense ecosystem and pave the way for projects of similar scope and scale to be established entirely within the Kingdom”, stated Mr. Abukhaled.

The AL-DIRIYAH corvette has a length of 104 meters, a beam of 14 and seating for a total of 102 people between crew and passengers. The contract for the construction of five corvettes entered into force in November 2018 and, since the launch of the first unit (July 2020), Navantia launched the five units with a period of four months between each one of them, which meant achieving this milestone in a record time of three years.

The corvettes are based on the AVANTE 2200 design, adapted to the requirements of the RSNF, offering advanced performance, excellent work at sea, high survivability, and ability to operate in extreme temperatures.

Simultaneously, around 500 crew members of these corvettes are completing the education and training process at the Navantia Training Centre (NTC) in San Fernando.

In addition to the corvette contract, Navantia agreed with SAMI (Saudi Arabian Military Industries) to create a joint venture in Saudi Arabia, an alliance that allows Navantia to position its integrated systems and technologically advanced solutions in the Arab market and area of influence and is aligned with the company’s internationalization strategy.

The contract assumes a global workload of around seven million hours and 6,000 jobs over five years. Of these, more than 1,100 are direct employees, more than 1,800 collaborating industry employees (more than a hundred companies participate at the programme) and more than 3,000 indirect employees generated by other suppliers.

The program includes, in addition to construction, the Life Cycle Support for five years from the delivery of the first ship, with an option for another five additional years, the last ship of which must be delivered in 2024.

It also includes the provision of various services, such as integrated logistics support, operational and maintenance training, provision of Education and Training Centres for the Combat System and Platform Control System of ships, Life Cycle Support, and ship maintenance systems at the Jeddah Naval Base.