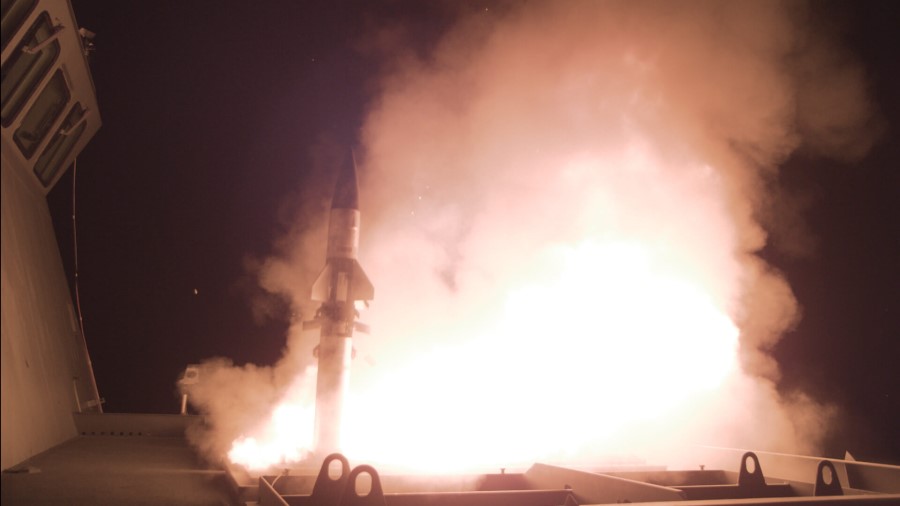 Rafael Advanced Defense Systems Ltd., with the Israeli Navy, and the Israel Ministry of Defense IMDO completed an advanced interception test of the C-DOME Naval Iron Dome System. The C-DOME is an advanced naval configuration of RAFAEL’s IRON DOME aerial defense system and is operated from the Missile Ship (INS) ‘Oz’ from the Sa’ar 6 ‘Magen’ Class Corvette.

As part of the interception test, the system was installed on the INS ‘Oz’ corvette, the second of four advanced missile corvettes received by the Israeli Navy in the last two years. Operationalizing the system constitutes a significant milestone in enhancing the capabilities of the corvettes.

The test simulated real threats and included the system’s successful detection and interception of targets in challenging scenarios. The C-DOME System constitutes a significant addition to the Israeli Navy’s defense capabilities in a wide array of missions, including the guarding of strategic assets, the Exclusive Economic Zone, and maintaining the regional maritime superiority of the State of Israel.

The test’s success is a product of the joint technological and engineering efforts of the Israeli Navy, the Ministry of Defense Directorate for Defense R&D (DDR&D), Rafael Advanced Defense Systems as the prime contractor and developer, the Israel Aerospace Industries’ Elta as the radar manufacturer, and mPrest as the C2 manufacturer. The operational system was created through the integration of multiple different systems, utilizing full operational capabilities that will be used by the female and male sailors of the Israeli Navy.

Defense Minister, Benny Gantz: “The operationalization of the C-DOME system is a significant milestone for the State of Israel’s naval defense capabilities. I would like to congratulate the Israeli Navy, the Ministry of Defense’s IMDO, and Rafael, for this groundbreaking technological process and for their cooperation and determination that led to this great success. Israel is continuing to build and strengthen its defense and attack capabilities – and will continue to keep its defensive edge in the area, protect its assets, its infrastructure and first and foremost – the lives and safety of the citizens of Israel.

Head of the Israel Ministry of Defense IMDO, Moshe Patel: “The C-DOME system expertly identified threats and successfully intercepted them by launching IRON DOME interceptors towards them from the sea. C-DOME, the naval configuration of the IRON DOME, promotes further operational flexibility and has become a part of the State of Israel’s multi-tiered missile and air defense array. The IRON DOME interception system completed a tremendously successful series of tests this past year, both in Israel and in the United States, as part of the interception tests conducted by the Marine Corps and the United States Army. The IRON DOME has met our operational objectives, including during Operation Breaking Dawn earlier this year.”

Deputy Commander in Chief & Chief of Staff, Rear Admiral Guy Goldfarb: “The Israeli Navy is at the height of the advanced operationalization of the Sa’ar 6 corvettes, currently taking place at record speed. The successful interception tests are a result of the C-DOME system’s implementation onboard the INS ‘Oz’ corvette. We recently acknowledged the initial operationalization of the INS ‘Magen’ corvette, the first to join the Sa’ar 6 series and complete its first operational activity – the patrol of the State of Israel’s Exclusive Economic Zone and the protection of our economic and strategic assets. The maritime arena has changed, thus leading to wider responsibilities and more extensive operational tasks for the Israeli Navy. The Sa’ar 6 corvettes will be a central means of protecting the Exclusive Economic Zone and ensuring the State of Israel’s maritime superiority.”

“The C-DOME is the first operational naval defense solution of its kind and the test on the Saar 6 corvette of the Israeli Navy serves as a monumental achievement in the development of the system. We are proud to see the C-DOME being operated by the Israeli Navy and its protection of Israel’s strategic assets.”