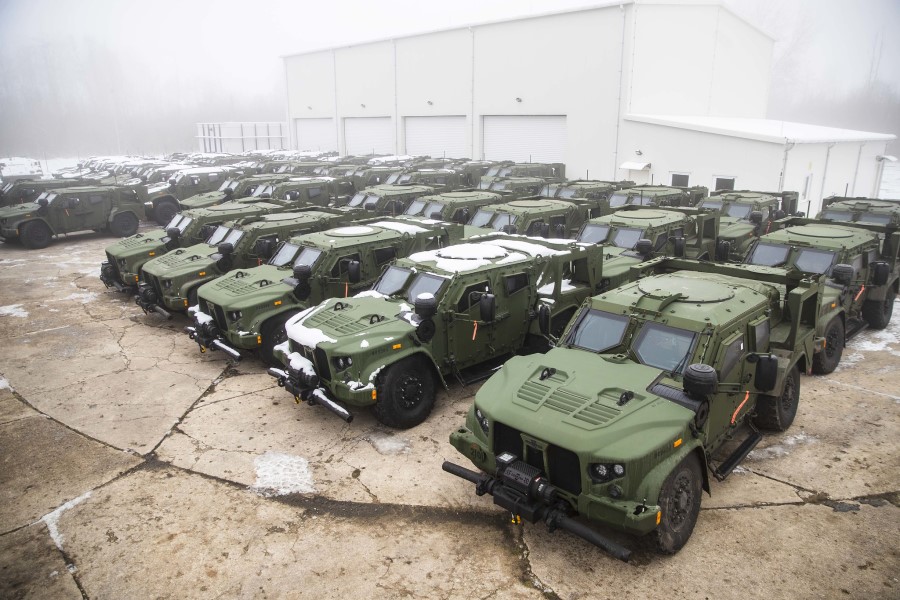 The second shipment of the 50 units of the JLTV Joint Light Tactical Vehicle was delivered to the Lithuanian Armed Forces Depot Service in Mumaičiai, Šiauliai district, earlier this week. In total, 200 JLTVs will be delivered to the Lithuanian Armed Forces as agreed in the contract between the Ministry of National Defence of Lithuania and the United States Government in 2019. The Ministry of National Defence signed a supplement of the contract additionally in October this year to acquire 300 more units of the JLTV which will arrive by the end of 2025. The Joint Light Tactical Vehicle is manufactured by U.S. company Oshkosh Defense.

“The Common Remotely Operated Weapon Station (CROWS) installed in part of the JLTVs enables the gunner to control the heavy 12.7 mm machine-gun from inside the armored vehicle. Daylight and thermal imaging cameras and a laser rangefinder multiply the efficiency of the powerful machine gun. We will have become more mobile and harder for the potential enemy to bite into,” says Minister of National Defence Arvydas Anušauskas.

The delivered JLTV reached the Port of Hamburg in Germany from the Port of Baltimore in the U.S. and the, Lithuania. Oshkosh Defense personnel is currently working at Mumaičiai getting ready the JLTV for operation and assembling the OGPK (Objective Gunners Protection Kit) turrets. The n the vehicles will be passed into the responsibility of the Lithuanian Armed Forces.

The first shipment including 50 JLTVs arrived in Lithuania last summer and is now successfully used by the Lithuanian military. The JLTVs will be assigned to battalions of the Lithuanian Armed Forces Iron Wolf and Griffin Brigades, the national Rapid Response Force being a matter of priority.

The JLTV is an advanced all-terrain vehicle with high crew protection. They will keep our troops safer and our reconnaissance, artillery and support operations more effective. The light armored vehicles will not only improve our armed capabilities but also the interoperability of U.S. and Lithuanian forces.