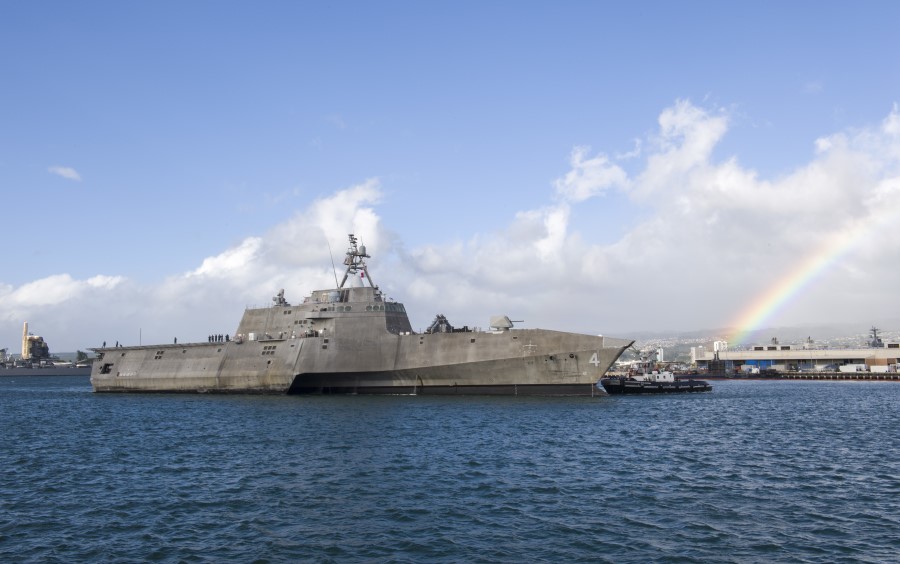 “Today we recognize the great contribution Coronado and its crew made in developing the operational concepts foundational to the current configuration and deployment of littoral combat ships,” said Rear Adm. Wayne Baze, the ceremony’s guest speaker and commander of Expeditionary Strike Group 3. “Thanks to Coronado, the future of LCS looks bright.”

Coronado and its Sailors contributed a tremendous amount of work and time to ensure the future success of the LCS program during the ship’s time in naval service. The ship worked alongside allied and partner nations while on a 14-month rotational deployment to the Indo-Pacific in 2017, including inaugural port visits to Cam Ranh, Vietnam and Lamut, Malaysia. While deployed, Coronado supported presence operations and maritime security operations to include the advancement of the LCS manned-unmanned teaming concepts through successful targeting exercises with an embarked MQ-8B Fire Scout. The ship’s successful operations demonstrated the relevance of LCS as a platform that provides flexible options and tactical advantages.

“Since April 5th, 2014, Coronado has been the vanguard for proving the capabilities of the LCS platform and establishing the mission sets,” said Cmdr. Spike Lamson, Coronado’s commanding officer. “The dedication of her crews and supporting teams have guaranteed the future success of this class of ship and the crews that will operate them over-the horizon. I am proud to have served alongside her Sailors, and I am grateful for the opportunity to give Coronado the farewell she deserves.”

Built by Austal USA in Mobile, Alabama, Coronado was commissioned April 5, 2014, at Naval Air Station North Island. The ship deployed to U.S. 7th Fleet, integrated with a carrier strike group, performed exercises with partner navies and conducted joint maneuvers with other U.S. Navy warships. Upon decommissioning, Coronado will be designated as Out of Commission, In Reserve (OCIR) asset, and its Sailors will receive follow-on orders to new assignments.