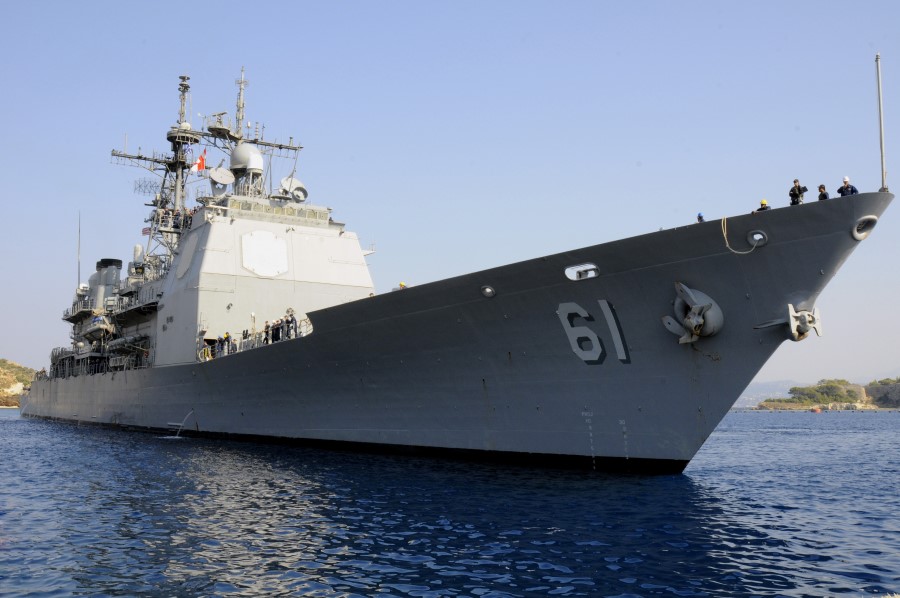 Vice Adm. Jim Kilby, Monterey’s 11th commanding officer, addressed the many guests. “Unique to the Navy, when we serve on a ship, it becomes part of us – I mean who we are, how we act, think and live. Similarly, we all in turn become part of that ship – it is a tremendously powerful legacy! This is most definitely the case with USS Monterey, she is certainly a testament to her excellent crews and she has been ‘Rough in Battle and Ready in Peace’,” said Vice Adm. Jim Kilby, deputy commander, U.S. Fleet Forces Command.

“Monterey executed 14 deployments, many availabilities, and as many training cycles. She was modified over her life to continue to be a relevant and a key ship in our Fleet. She will leave a great legacy for many years in the future as those who proudly call themselves Monterey Sailors continue to serve our Nation.”

Monterey’s current Commanding Officer, Cmdr. David M. Schaller, spoke of the powerful bond between Sailors and their ships and the lives shaped aboard. His words resonated with the audience as they bade farewell to the cruiser.

“Nobody joins the Navy to decommission a ship,”said Schaller. “The Monterey crew performed their duties of putting her to rest in the most professional and exemplary manner, honoring her storied history and service to our nation.”

The ceremony atmosphere was one of fond but somber remembrance as Schaller shared a compilation of stories and memories created over Monterey’s three decades of service, inviting shared laughter from the crew and their families.

Monterey was built at Bath Iron Works in Bath, Maine, and commissioned in Mayport, Florida, June 16, 1990. Monterey’s namesake commemorates the battle fought Sept. 20, 2846 in the war with Mexico.

“She has served her crews and her nation well and rightfully takes her place among the ships that, for well over 200 years, have played an indispensable role in protecting the United States of America and serving her strategic interests across the world,” said Schaller. “This ship and her crews will forever share a legacy that will be felt across the fleet for years to come.”

Three previous Navy ships have been named Monterey: a screw tug, which served in San Francisco Bay from 1863 to 1892; Monitor No. 6, which commissioned in 1893, serving in the Spanish-American War; and the WWII aircraft carrier, which won 11 battle stars.

Over its 32 years of service, the cruiser has been an important part of America’s national defense strategy.